"A Chicago Institution…undeniable accomplishment and even greater potential."

"…A hot franchise…will afford women a rare luxury: the chance to put on a quality performance..."

"Miss this one at your own peril!"

"An excellent opportunity for people to check out up-and-coming female musicians..."

"…An environment free from competition and criticism… all genres of great music."

"…An opportunity for female artists to showcase themselves in a cool club with a kick-ass band."

"A tremendous opportunity for women..."

Gathering support from NAMM in 2004, and the producer project with Guitar Center bringing winning performers into world class recording studios, CSN has developed into a global presence.

The format is a simple one. All singers are welcome; all styles of music, all levels of experience, all walks of life. Each singer shows up the afternoon of the show, charts in hand, and runs her songs with the CSN Band. Later that evening they hit the stage with a hot band in a cool venue and give the performance of a lifetime! 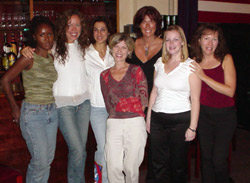 CSN founder Lori Maier (Bio) hosted the first Chick Singer Night in Chicago over 30 years ago, and it is now stonger than ever. Since then, CSN has spread its wings across the country and is now a national monthly or quarterly event in multiple cities across the U.S. and as far away as Stockholm, Sweden (see city links at left). The success of this program has inspired CSN alumna to support singers and songwriters with similar spinoff showcases through the years. It's all an amazing testament to that first CSN show in November of 1988.

The credit for CSN's success belongs to many people, all of whom give their time and music to create this special songfest.

Click here for information on how you can join us!